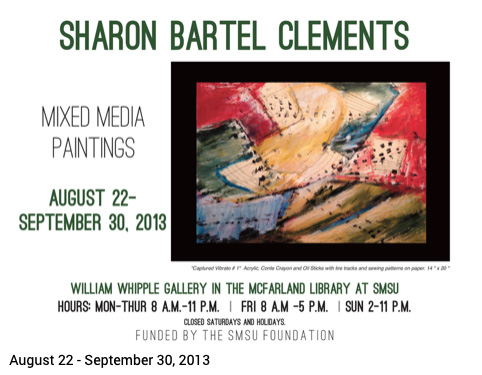 If you look closely at some of artist Sharon Bartel Clements’ work, you may see something you would usually use if you were making a shirt or a dress. Bartel Clements’ artwork will be on display through Sept. 30 in the William Whipple Gallery at Southwest Minnesota State University. Bartel Clements, who resides in the Santa Fe, N.M. area, started teaching art right out of college, beginning in the Lewiston Porter area in New York. She taught seventh- through ninth-grade art. “I just loved it,” she said.

Then she got married and started moving around the country with her husband’s job. About 10 years after she stopped teaching, the couple moved to New Jersey, she said. “I would go to New York to the Art Students League,” she said. She said that she’d always been interested in painting and started taking more abstract and contemporary painting classes. She said she uses mixed medium in her work, mostly using oil paint. “I’ve actually, lately, been using collage,” she said. Bartel Clements said that at one time in her life, she sewed all her clothes, and that the sewing patterns have been used in her collages. “From there, I had a good understanding of constructing and body,” she said.

She said that her painting has evolved from realistic toward more abstract. In her artist statement, Bartel Clements said art for her is the process of seeing life as a reflection, remembering what has been forgotten in our lives and finding its symbolic transformation.

In the last couple of years, Bartel Clements said she started working with sculptural materials – plaster wraps. She used the wraps to start a new series of works, Ancient Warrior Torso. The works portray everyday women as warriors, she said.

“I’m using plaster wrap basically to make a shell,” she said. Then she pieces them together, incorporating some of the sewing patterns, she said. “What I’m getting is a much different torso than when I started.” Bartel Clements said she’s been getting positive feedback on her Ancient Warrior Torso series.

“My current sculptural work is inspired by consciously thinking of patterns in behavior and how that denotes who we are, and who we become,” she said in her artist statement. “The Torso project depicts the structure of a female torso, in all different types, sizes and shapes.” She said she is continually working on the Torso project. “I have like 15 now,” she said. Bartel Clements said she’s working toward 25 pieces. “It’s an ongoing project for now.”